We hope you will join us on December 4, 2022, at 5 PM PT as we honor those who have made a tremendous impact on the progressive movement in the Los Angeles. The Annual Awards Gala is always a great opportunity for us to get together, celebrate, and honor the great contributions of our honorees.

This year, we will be honoring:

Mike Bonin has represented Westside neighborhoods on the City Council since 2013, Mike has been a leader in taking on LA’s toughest challenges, unafraid to advocate for bold, transformative solutions on homelessness, affordable housing, climate change, transportation, and public safety. An accomplished advocate for his district, Mike has been a champion of neighborhoods, a force for smart, responsive government, and a progressive problem solver.

Naeun Rim is a Litigation Partner at Manatt, Phelps & Phillips, LLP who has devoted a significant portion of her 14-year legal career to representing marginalized members of indigent communities. She started her career at Public Counsel, the nation’s largest pro bono law firm, and spent four years as a Trial Deputy at the Federal Public Defender’s Office in Los Angeles. As a partner at a law firm, Naeun has taken numerous cases to trial and arbitration and continues to spend hundreds of pro bono hours each year taking on civil rights cases alongside justice-oriented organizations like the ACLU of Southern California and the Prison Law Office.

Nana Gyamfi is the Executive Director of Black Alliance for Just Immigration (BAJI), the largest Black-led racial justice and immigrant rights organization in the country. A graduate of Cornell University and UCLA School of Law, she is the current President of the National Conference of Black Lawyers (NCBL),”the Legal Arm of the Black Liberation Movement.” She has spent over three decades working on behalf of and with Black Diasporic communities for Black liberation.

Community Power Collective (CPC) is an emerging, member-led organization that has helped advance housing and street vendor justice since its founding in 2020. A leading member of the Keep LA Housed Coalition, CPC is working to see a Tenant Bill of Rights enacted in LA County. CPC and the 2,500 street vendors it engages with on a yearly basis lead the LA Street Vendor Campaign, which has won legalization of street vending in the City of LA.

Melinda Bird, for more than 40 years, has fought state-sponsored disability and race discrimination against people who are poor and disenfranchised. She has led and won complex class actions on behalf of tens of thousands of special education students, mentally ill and autistic youth, seniors who rely on home care support, unhoused people and disabled prisoners. Melinda has worked at a legal aid program for the poor in Appalachia, the Western Center on Law and Poverty, the ACLU of Southern California, and is currently Senior Litigation Counsel at Disability Rights California, the federally designated protection and advocacy program for the state.

Your Support is Important!

Over the last year, NLG-LA members have been at the forefront of protecting civil liberties across the Los Angeles area. 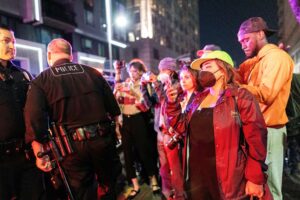 We have also been a key partner in the “Check The Sheriff” coalition, which has worked tirelessly to hold Sheriff Villanueva and the entire Los Angeles County Sheriff’s Department accountable for their continued police brutality, systemic corruption, and abuses of power. In August, the coalition’s advocacy resulted in the Los Angeles County Board of Supervisors agreeing to place a charter amendment on the ballot that would allow the County to remove a Sheriff who violates the law. This is a big step forward in fostering accountability. 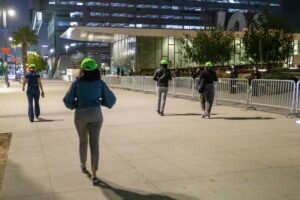 brings together hundreds of attorneys, legal workers, and allies to recognize our accomplishments as a community and remind ourselves of the work that remains ongoing.

This year’s event will be held remotely on December 4, 2022, at 5 PM PT. You’ll want to arrive early! Our slideshow, showcasing the Guild and our wonderful honorees will begin at 4:30.

Buy your tickets, ads, and sponsorships here! (Or if you’re not ready or want to send a check, learn more about pricing options here)